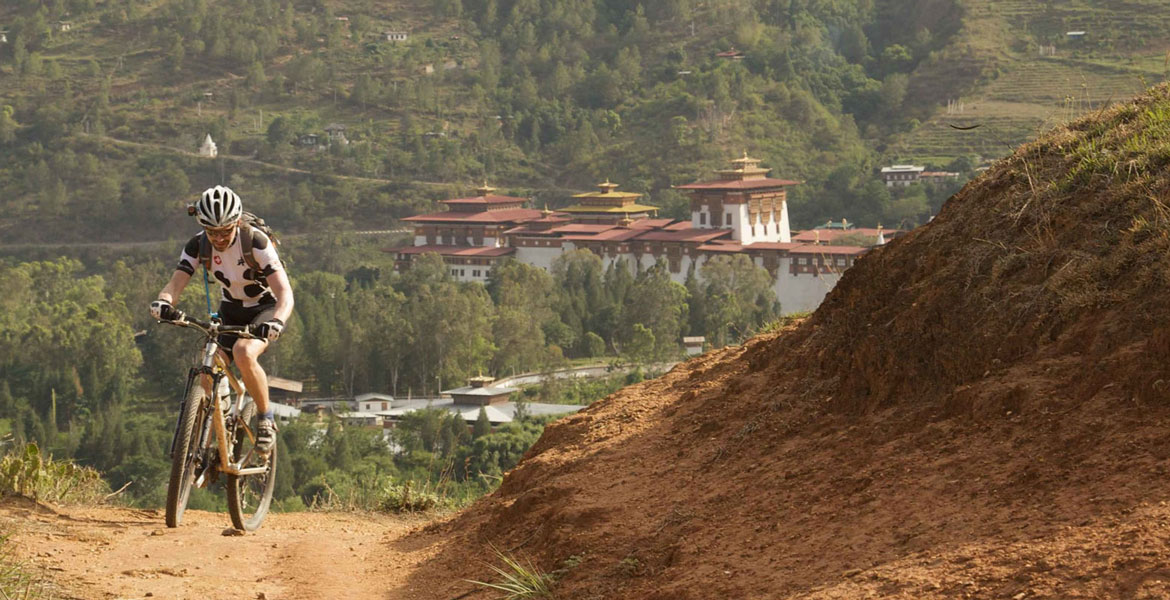 Bhutan’s mountainous terrain offers a fascinating adventure for cycling enthusiasts. The roads wind up and down mountains with exhilarating drops of thousands of metres, and of course the challenge of surmounting equally high passes of over 3000 metres. The route is accompanied by mixed forests, pasturelands, rich meadows and valleys dotted with medieval villages and towns rich in culture. This tour allows time for visiting the highlights of Paro, Thimphu, Punakha, Trongsa and Bumthang. You can choose from easy to adventurous trails, and will be backed up by professional support staff at all times. Utpala Tours will co-ordinate your entire trip including arranging quality mountain bicycles for your riding pleasure unless you choose to bring your own bike.

DAY 01: ARRIVE PARO
The flight to Paro is one of the most spectacular mountain flights in the world, with a constantly changing panorama of some of the highest mountains on earth. Our representative will meet you at Paro airport. After lunch enjoy afternoon sightseeing around Paro, including a visit to the National Museum, Ta Dzong. This museum houses many religious relics, works of art and handicrafts offering a great orientation into Bhutan’s historical, cultural, and religious past. Next, visit the Rimpong Dzong to see the painting of the great saint Milarepa, considered as the master of meditation by the Bhutanese and believed to have attained enlightenment in a lifetime. Dzong’s are large monasteries and district administrative centres, which were once strategic forts. Afterwards walk to the beautiful cantilever wooden bridge still in use. Before dinner at the hotel there will be an orientation on Bhutanese etiquette by your guide. Overnight at your hotel in Paro.

DAY 02: PARO – THIMPHU (Cycling)
After breakfast guest will begin a full day’s ride to Thimphu till the point guest can ride. The average gradient of the road is excellent for cycling, as there are few steep climbs or descents. Enjoy riding beside rivers and through a mixture of rice fields, coniferous forests and hills dotted with chortens and monasteries. After enjoying a picnic lunch at a wayside spot, continue riding via a narrow gorge through to the widening valley at Namseling. Finally, the quaint suburbs of Thimphu begin to appear and you will see the impressive Semtokha Dzong, built in 1627. The ‘Bridge of Prophecy’ decorated with many prayer flags welcomes you to downtown Thimphu where you will continue down the main street to your hotel. Enjoy remainder of day at leisure. Overnight at your hotel in Thimphu.

DAY 03: THIMPHU
Enjoy sightseeing in Thimphu beginning with a visit to the National Memorial Chorten depicting the Buddhist faith in the form of paintings and statues. This temple was first initiated by the Third King as a protection from the negative elements of modernization. The Royal Queen Mother completed it as a memorial stupa for the third King who passed away in the year 1972.

Other highlights include the 12th Century Changangkha Temple, Drubthob monastery housing the Zilukha nunnery, the School for Arts and Crafts where the students are taught to master the 13 types of Bhutanese art, the National Library housing a collection of Bhutanese scriptures dating back to the 8th century, and a fascinating replica of a medieval farmhouse at the Folk Heritage Museum. If there is time, you may also visit the nursing pen for the Takin, the national animal of Bhutan. And Tashichhodzong. Overnight at your hotel in Thimphu.

DAY 04: THIMPHU – PUNAKHA (Cycling)
The road to Punakha begins with a 22km ride and a height gain of 670m up to Dochu La Pass (3,100 meters). The hillsides are covered in a luxuriant temperate forest of abundant rhododendron and magnolia and several species of deer and monkeys make their home in this forest. Stop for lunch at Dochu La where on a clear day you will have a spectacular view of the Himalayan Mountains.

The downhill ride from the Dochu La into the Punakha valley will leave you speechless as you glide through lush forest spread over a distance of 50 kilometres.

After refreshing in the hotel in Punakha, visit Punakha Dzong, built in 1637 by Shabdrung, the ‘Unifier of Bhutan’. It is situated at the confluence of the Mo Chu and Pho Chu (Mother and Father Rivers) and is the winter residence of the Je Khenpo and hundreds of monks who move en masse from Thimphu in the colder months. The three story main temple of the Punakha Dzong is a breathtaking example of traditional architecture with four intricately embossed entrance pillars crafted from cypress and decorated in gold and silver. Overnight at your hotel in Punakha.

DAY 05: PUNAKHA – TRONGSA
Enjoy exploring the bustling market town of Wangduephodrang before visiting Wangduephodrang Dzong. Built in 1639 the strategically located Dzong is perched on a spur at the confluence of two rivers. Drive over the Pele La pass (3,420m) on the Black Mountain range, which divide western and central Bhutan. White langur monkeys can often be spotted in the moss-draped forests in this area. Further on, in silent isolation surrounded by great forested hills is beautiful Chendibji Chorten built in the 18th Century to commemorate the subjugation of a local demon. It is built in a style unusual for Bhutan, with painted eyes facing the four directions. The imposing Trongsa Dzong can be viewed across a deep canyon to signal your approach to the town around a curving road. Overnight at your hotel in Trongsa.

DAY 06: TRONGSA – BUMTHANG (Cycling)
After breakfast visit Trongsa Dzong, a masterpiece of Bhutanese architecture. Trongsa has the largest Dzong in Bhutan and its foundations were laid in the 16th Century. There are now 22 temples in the complex. Afters light refreshments begin the drive to Bumthang, one of the most spectacular valleys in Bhutan and also the spiritual heartland of the kingdom. The road climbs rapidly up a series of hairpin turns out of Trongsa. After passing through cultivated fields and forested hillsides you will reach the Yutung La Pass (3400m). From here ride down through a dense, beautiful coniferous forest to a wide, cultivated valley known as Chummey valley before continuing on in the soft afternoon light to the town of Jakar. Overnight at your lodge in Jakar, Bumthang.

DAY 07: BUMTHANG
In the morning visit Kurjey Lhakhang, one of the most sacred places in the kingdom where Bhutan’s patron saint Guru Rimpoche meditated and 7th century Jambay Lhakhang. It dates back to the origins of Buddhism in Bhutan and is one of the Kingdoms oldest temples. After lunch, visit Jakar Dzong and Tamshing Lhakhang, founded in 1501 by Pemalingpa and containing interesting and ancient Buddhist wall paintings. Afterwards enjoy exploring the village of Jakar, Bumthang’s main township. Overnight at your lodge in Jakar, Bumthang.

DAY 08: BUMTHANG – URA – BUMTHANG (Cycling)
Cycle to the Ura Valley, approx 69 kms from Jakar. The ride begins with a height gain of 900 metres over almost 40 kilometres to the Shertang La pass. The Ura Valley, on the far side, is the highest of the Bumthang Valleys. Extensive pastures line the road and just before the pass there is a panoramic view of the mountains of Lunana. Descend from the pass on long looping roads through pastureland and fields to Ura village. Enjoy some sightseeing in Ura Valley before driving back to Bumthang. Overnight at your lodge in Jakar, Bumthang.

DAY 09: BUMTHANG – PUNAKHA
Drive back to Punakha, stopping at Trongsa for lunch. There will be opportunities to ride along various stretches of road if desired. Overnight at your hotel in Punakha.

DAY 10: PUNAKHA – THIMPHU (Cycling)
Enjoy a leisurely ride of about 12 kms to reach Khamsum Yulley Namgyal Chorten situated on a beautiful hillock. It houses paintings belonging to Nyingmapa Traditions. Take a picnic lunch on a picturesque riverside before riding back to Punakha. Afterwards, drive for Thimphu. Overnight at your hotel in Thimphu.

DAY 11: THIMPHU – PARO
After breakfast you can either begin riding back to Paro, or elect to drive there later to allow time to stroll around Thimphu. If it’s the weekend, you can walk through the market to see the variety of food of Bhutan, including basket upon basket of fiery chillies, fresh cheese and a variety of fresh greens. In addition, many stalls contain Bhutanese handicrafts and household items. On arrival in Paro, check into the hotel. Overnight at your hotel in Paro.

DAY 12: PARO
After breakfast hike to Taktsang Monastery. The walk of approximately 1.5 to 2 hours uphill takes you almost a kilometre above the Paro valley floor (for those who cannot hike we will arrange a horse for transfer up to cafeteria). The view of Taktsang Monastery built on a sheer cliff face 900 metres above the valley floor is a spectacular sight. The Monastery is also an important pilgrim site for the Buddhists. The great Guru Rimpoche is said to have flown here on the back of a tigress when he brought the teachings of the Buddhist Dharma to Bhutan in the 8th Century. Nearby there is a teahouse where you can stop for refreshments before returning to Paro for lunch.

In the afternoon drive or ride the relatively flat road to the ruins of the 17th Century Drukgyel Dzong, built to commemorate a victory against invading Tibetans in 1644. In fine weather the towering peak of the sacred Mount Jomolhari (7314m) appears as a stunning backdrop. On the return drive to Paro, visit 7th Century Kyichu Lhakhang, one of the 108 temples constructed by the Tibetan king Songtsen Gampo.

Alternatively, day 12 could be spent on a day trip to the Haa Valley, one of the most picturesque districts in Bhutan. Reached via the beautiful Chelila Pass, Haa Valley is characterised by its surrounding rugged and mountainous terrain. On the return to Paro, you may choose to ride the exhilirating downhill run from Chelila Pass. Overnight at your hotel in Paro.

DAY 13: DEPART PARO
Breakfast in the hotel, then drive to the airport for flight to your onward destination.
Tashi Delek!