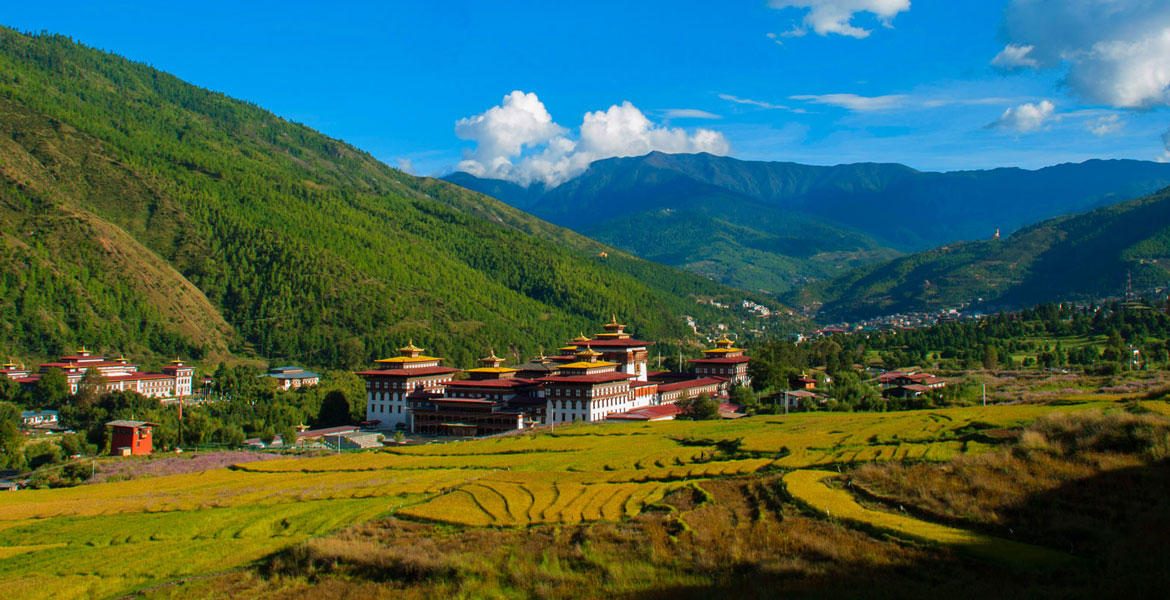 Arrive – Paro airport and then transfer to Thimphu. Our pilgrimage begins with a journey towards east into the booming metropolis of Thimphu. Situated at an altitude of 2,300 m it is the home to 100,000 Bhutanese. Thimphu being the capital of Bhutan, offers unique opportunities to explore the Bhutanese culture, lifestyle and traditions in depth.  We invite you to see the sights of the Kingdom’s capital with us. Below we have listed some of the experiences that we enjoy the most! After lunch we will spend our time circumambulating the sacred National Memorial Chorten.  This is a Tibetan-style chorten built in 1974 in memory of the late King Jigme Dorji Wangchuk who passed away in 1972. It is one of the most visible religious structures in town and for many people it is the focus of daily worship. Remember to walk around the Chorten at least once to gain merit and good luck. We will take in more of kingdom’s rich culture at the Folk Heritage Museum. The museum is a restored three story traditional rammed mud and timber house inaugurated as a museum by Her Majesty the Queen Ashi Dorji Wangmo Wangchuk in 2001. It showcases the traditional artifacts used now and in the past, which helps connect people to the Bhutanese rural life. From the museum we will drive to the National Post office for stamps. Bhutan is famous for producing unique and innovative stamps. After selling peculiar “CD-stamps” Bhutan’s Post office now offers personalized stamps; we invite you to surprise your family and friends with your custom-made stamp made with one of your favorite holiday photographs! Next we will visit the Bhutanese Paper factory. The art of handmade paper in Bhutan dates back to the 8th century, although usage was limited mainly to religious purposes. Today it is considered an important element in the preservation of Bhutan’s cultural heritage. The factory allows guests to view the paper making process and purchase gifts from their show room.

Buddha Dordenma is a gigantic Shakyamuni Buddha statue under construction in the mountains of Bhutan. The statue will house over one lakh (one hundred thousand) smaller Buddha statues, each of which, like the Buddha Dordenma itself, will be made of bronze and gilded in gold. The Buddha Dordenma is sited amidst the ruins of KuenselPhodrang, the palace of SherabWangchuck, the thirteenth Desi Druk, overlooking the southern approach to Thimphu, the capital of Bhutan. Upon completion, it will be one of the largest Buddha rupas in the world, at a height of 169 feet (51.5 meters). Although its completion was planned for October 2010, construction is still ongoing

Towards evening we will visit Tashichhoe Dzong and have glimpse of king Jigme’s Palace. The Dzong is popularly known as Thimphu Dzong. It is the seat of the government and the centre of all religious affairs of the Kingdom. It houses the office and the throne room of His Majesty King Jigme Khesar Namgyal Wangchuck. Just below the dzong we can have a glimpse of King Jigmi’s palace.

The sub-tropical valleys of Punakha and the surrounding mountainsides offer a large variety of attractive places to explore and discover monasteries and the most impressive Dzong in the country.

Before we drive on the national east – west highway we will briefly visit Semtokha Dzong. The oldest dzong in the country (built in 1629) stands on a soaring ridge 5 km away from Thimphu. Its strategic position is evident as it controls all the approaches to and from Thimphu. Notice the contrast of traditional and modern as you enter the dzong grounds; the white painted dzong with the growing city in the background and the newly constructed 164 ft / 50 m tall Buddha statue perched on the hill right behind.  After the visit we will continue our journey towards east. Roughly 50 minutes drive we will stop to stretch by hiking to Hongtso Goemba (1.5 – 2 hrs hike). The Goemba was built in 1525 by the older brother of Drukpa Kuenlay, the Divine mad man. It is a two story traditional Bhutanese building where the main alter room has an enormous statue of Guru Tshoki Dorji in a standing posture together with his spiritual consort. Inside we can view very old wall paintings. If weather permits we will have great views of the extended eastern himalayas in Bhutan from Dochula pass (3050 meters). After lunch we will descend our way into the Punakha valley. In just 2 hrs drives we will descend 1700 m into the valley.

There we will hike to the famous Chimi Lhakhang (Fertility temple. 1 hr hike) the 30-minute walk from the road to the lhakhang is through open farmland and rice paddies. It is believed that a demoness who had been terrorizing the valley transformed herself into a black dog to escape the wrath of Drukpa Kuenlay, the Divine Madman. However, he caught the dog and buried it under a pile of earth shaped like a woman”s breast. He then built a chorten on top of this mount and prophesied that a temple would one day be consecrated over it. True to the prophecy, his brother, Lam Ngawang Chogyal, built Chime Lhakhang in 1456. If you are wishing for a child, it is believed by the Bhutanese that a visit to the Divine Madman”s temple, Chime Lhakhang, might help increase your chances! Thousands of people visit this temple on pilgrimage and numerous couples visit the lhakhang to pray to become pregnant and receive a wang (blessing) from the saint with the „magic thunderbolt of wisdom”. Many parents also bring their newborn children to receive the baby”s name from the local lama.

After early breakfast we will travel up the valley north and cross the Mo Chhu to hike up and pay respect to the grand Khamsum Yuelley Namgyal Chorten, The Chorten is 30 meters (100 feet) tall and can be seen in the distance when driving or walking up from the footbridge towards the lodge. The three-levelled chorten took eight and a half years to build and was consecrated in 1999. Dedicated to the Fifth King, it was built to remove negative forces and to provide peace, stability, and harmony in an ever- changing world. It is therefore filled with every form of colourful protector imaginable. Heading back down the valley we will stop for Lunch. After lunch we will visit the stunning Punakha Dzong. The Dzong is considered one of the most important and also one of the most beautiful Dzongs in the Kingdom. It was built by Zhabdrung Ngawang Namgyel in 1637, and was the seat of the government every winter until Thimphu was established as the permanent capital in 1955. It is still the winter residence of the Dratshang (Central Monastic Body). Take time to admire the impressive, colourful and detailed artistry of the surroundings, including huge statues of Buddha, Guru Rinpoche and Zhabdrung Ngawang Namgyel, as well as paintings of one thousand Buddhas.

The journey west takes us back to Paro valley following thru wang Chhu and Pa Chhu rivers.

Paro Cultural Tour should always start with a casual browse through the National Museum, housed in the Ta Dzong (Watch Tower) of the Rinpung Dzong. In the Museum the intriguing collection of artifacts serves as a great introduction to the rich culture and heritage of the Kingdom.  The National Museum boasts a rich variety of exhibits collected from all over the country and belonging to different eras, some as early as 2000 B.C. A visit through the galleries shows the country”s transition from the later Stone Age to a modern Mahayana Buddhist kingdom.

We will then stroll down to the Paro Dzong and take in the amazing architecture of this 17th century monument, a premier example of Bhutan”s architecture. Paro Dzong, built in 17th century to defend Paro from the Tibetan invasion, is also known as Rinpung Dzong, which means the ‘fortress on a heap of jewels’. This fine example of Bhutanese architecture now serves as a central monastic and administrative seat of the Paro district. From the Dzong, a leisurely walk back into Paro town crosses the scenic Nyamai zampa, a unique model of Bhutan”s traditional cantilever bridge.

Tiger”s Nest or Taktshang Goempa is one of Bhutan”s most revered monuments. It literally hangs off the face of a cliff 900 meters (2952 feet) above the valley floor. The legend states that Guru Rinpoche flew into

Bhutan on a mythical tigress and meditated in a cave before bringing Buddhism to Bhutan. The Taktshang Goempa is built around the cave, which is opened to the public once a year at the end of August. The four-hour round trip hike offers spectacular views of the Goempa and the valley below. Horses or mules can be arranged on request to help lighten the

journey. After lunch drive up north to take a walk around the Drukgyel Dzong (ruins). The Dzong was built in 1649 to celebrate a decisive victory over Tibetan forces and to curtail further invasions. Under the leadership of Zhabdrung Ngawang Namgyal, the Bhutanese fought twelve battles with the Tibetans in different parts of the country, whereof one took place in Drukgyel Dzong. In the later years, the Dzong became an administrative centre under the Dzongpon (Lord of the Dzong) until gutted by a fire in 1951. Heading back down the valley we will stop at the auspicious kyichu Lhakhang. The 7th century monastery is one of the oldest and most sacred temples in the Kingdom where the seed of Buddhism was won in Bhutan. The Tibetan King, Songsten Gampo ordered the establishment of monasteries in the Himalayan region to subdue evil spirits and to spread Buddhism. Of the 108 monasteries, which were to be built, two major ones were built in Bhutan namely the Kyichu Lhakhang and the Jampa Lhakhang in Bumthang.  Kyichu Lhakhang, which pins down the left foot of a treacherous Ogress, are a great finish to this day of cultural immersion and your journey to this ancient kingdom of Bhutan.