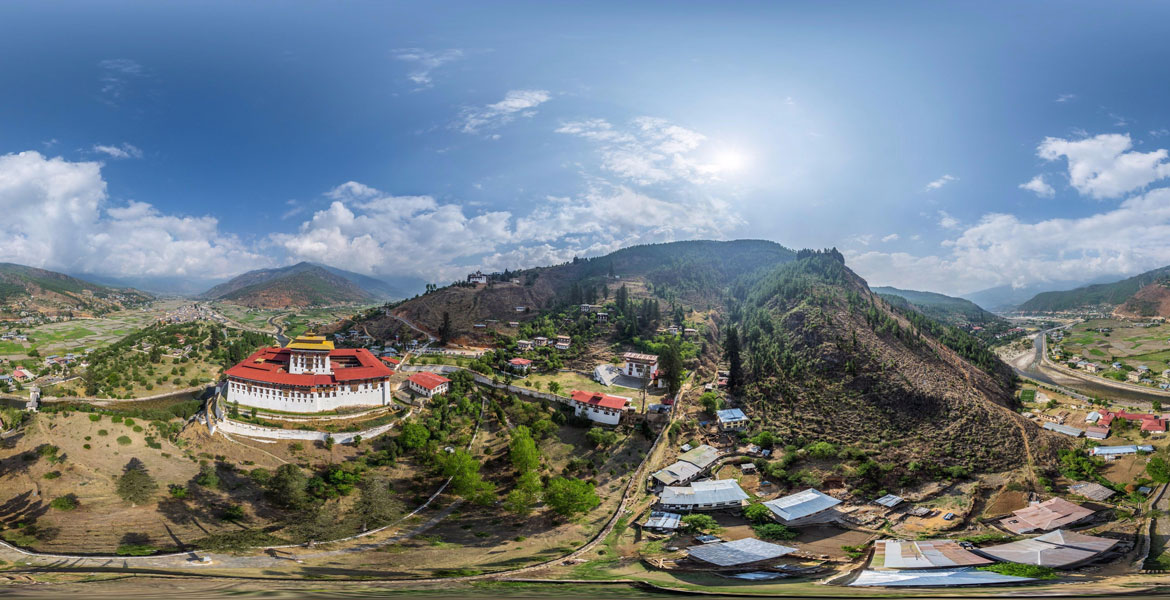 Upon arrival in Paro, take a scenic drive through the river valleys and hills of the Bhutanese countryside to the nation’s capital of Thimphu. After checking in to your home for the next two nights, the rest of the day is yours at leisure to begin your explorations of the town, enjoy the amenities of your luxury hotel or just relax and rest up from your travels.

Spend the day visiting the highlights of Thimphu, including the Memorial Chorten, erected in 1974 as a sign of hope for world prosperity; the traditional school of arts and crafts; the Folk Heritage Museum and National Library, the takin (a goat-antelope) sanctuary; and a viewpoint for a superb panorama of the Thimphu valley.

After your drive to Punakha, visit Chimi Lhakhang, the Temple of Fertility, a small structure with a golden roof and spire. Local women often come to the temple to receive blessings for their future children. Prospective parents can also name their children here by picking one of the bamboo slips placed in the altar that are inscribed with the names of boys and girls. Later, drive to Nobgang and walk around the villages and visit a farmhouse. If time permits, see the impressive Punakha Dzong, built at the junction of the two rivers in the 17th century. For many years when Punakha was the capital of the country, the dzong served as the seat of the government.

The valley of Gangtey is one of the most beautiful spots in Bhutan. The surprise of finding such a wide, flat valley without any trees after the hard climb through dense forests is augmented by an impression of vast space, an extremely rare experience in Bhutan where most of the valleys are tightly enclosed. Your first stop today is the Gangtey Gompa. Perched on a small hill that rises from the valley floor, the Gangtey Monastery is the only Nyingmapa monastery on the western side of the Black Mountains and is also the biggest Nyingmapa monastery in Bhutan. The monastery is surrounded by a large village inhabited mainly by the families of the 140 gomchens who are trained in Buddhism and take care of the monastery. Later, explore the fascinating Phobjikha valley. This place is the winter home of black-necked cranes that migrate from the arid plains in the north to pass winter in a milder climate. The valley also boasts two beautiful meandering rivers: Nakay Chhu and Gay Chhu.

Depart for the scenic drive back to Paro. Upon arrival, explore the National Museum, which houses a collection of relics, religious thankga (scroll) paintings and natural history exhibits. Afterward, head to the 17th-century Rinpung Dzong for an exploration of this historically important religious center and fortress.

Hike (or ride on horseback) to the picturesque Taktsang (“Tiger’s Nest”) Monastery, which clings to a cliff 3,000 feet above the valley floor. Legend has it that Padmasambhava (Guru Rinpoche) flew to this location on the back of a tiger in the 8th century. Once arrived, he is said to have meditated in one of the caves that dot the mountain for three years, three months, three weeks, three days and three hours. The Bhutanese people credit Guru Rinpoche with introducing Buddhism to their country, and the Taktsang Monastery is one of the principal pilgrimage destinations in Bhutan. Spend the day among the monks as they pray, chant and pursue their sacred duties. Late this afternoon, drive through the Paro Valley to visit the ruins of some of Bhutan’s most ancient Buddhist shrines

Today, your journey through the mountain kingdom of Bhutan comes to an end. Bid farewell to the soaring peaks, pristine lakes, swaths of virgin forest and high-altitude valleys that constitute this modern-day Shangri-La. After a tasty breakfast, you will be escorted to the Paro Airport to board your onward flight.